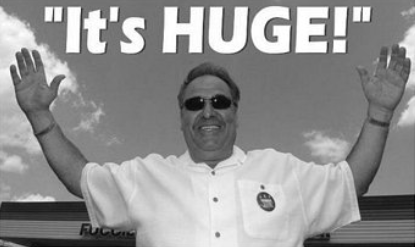 Billy Fuccillo, owner of Fuccillo Automotive Group, has been a “HUGE” part of the automotive industry for nearly four decades.

Born and raised in Greenport, Long Island, Billy maintains close ties with his family, including his father Veto, a hair stylist, his mother Joan, and his two siblings, Joan and Gary. A born leader and excellent athlete, Billy served as captain of this high school football, baseball and golf teams. While he loved all sports, Billy excelled on the football field, where he was voted a McDonald’s Football All-American. Billy was recruited by many universities including Notre Dame, Penn State and Temple, before ultimately choosing to attend Syracuse University on a full football scholarship.

After graduating from SU in 1978 with a degree in marketing, Billy got his start in the automotive business as a salesman at a dealership in Fayetteville, New York. He then spent three years in the wholesale business rounding out his automotive education. In 1987, Billy purchased his own used car dealership in Syracuse, New York.

Billy made the most of his opportunity in Syracuse, cutting through the clutter with aggressive advertising and promotions. The formula quickly paid off, as he expanded his reach, first northward into Adams, New York, before stretching it across the state. Today, Fuccillo Automotive Group is the largest automobile dealer in New York State with locations in the Albany, Buffalo, Rochester, Syracuse and Water town markets.

Billy was one of 15 dealers nationwide to be welcomed into the Kia President’s Club in 2009 for achieving the highest overall sales volume and outstanding customer satisfaction. He has been accepted into the Kia President’s Club each year since. Over the course of his career, Billy has owned dealerships all over the country, including New York, Florida, California, Nevada, New Mexico, Pennsylvania, and South Carolina.

Altogether Fuccillo Automotive Group now comprises 28 dealerships and 33 franchises in New York and Florida, and employs 2,500 people. Billy’s son, Billy Fuccillo Jr., has followed in his father’s footsteps and operates four of his own dealerships.

Known for his “HUGE” monthly promotional events, Billy hosted his first event in May 1996 at his dealership in Adams, New York, where Robbie Knievel, son of Evil Knievel, set a world record with a no-hands jump over 25 new cars. Since then, Billy has held half-court basketball shoot-outs, miniature golf tournaments and enter-to-win contests to give his customers the chance to win not only cars, but houses, a tanker of gas, trips around the world, cruises and cash, and more.

Most importantly, Billy has made giving back to the communities he serves a top priority. He regularly includes charities in his promotions, with benefactors of Billy’s generosity having included local children’s, disability services, domestic violence, veterans and hunger relief organizations, and schools

Today, after nearly 40 years in the business, Billy remains at the top of his game and Fuccillo Automotive Group is stronger than ever. Whether you’re talking about sales numbers, customer service or commitment to community, there’s really only one way to describe it all – “IT’S HUGE!TM”