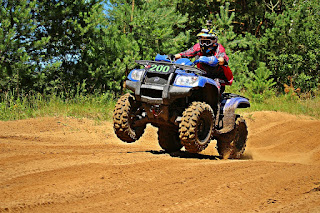 The global All Terrain Vehicle (ATV) Market was estimated at USD 6 billion in 2015. It will grow at a CAGR of around 5% during the forecast period (2016-2024). The market should exceed USD 9 billion by 2024. All terrain vehicles (ATVs) are popularly known as quads, three-wheelers, quad bikes, or quadricycles.

ATVs are single-seated open motor vehicles with either three or more tires. These tires are specifically designed for rough terrains. Quads are ridden over rugged grounds, sand dunes, or paved & unpaved roads. The growing trend of recreational activities; such as off-roading and racing can also drive the market till 2024.

Demand for unique riding has increasingly led recreational centers to add ATVs to their amenities. The need for technically advanced features is projected to raise product costs, hampering the market.

To reduce fatalities & injuries; regulatory bodies, like ASI (All-Terrains Vehicle Safety Institute) have standardized the adoption of safety equipment. Protective gears; such as seatbelts, helmets, goggles, and others are mandatory for quad riders.

Moreover, the ‘Consumer Product Safety Commission’ (CPSC) has laid down rigid rules that prohibit children under the age of 16 to ride ATVs. Its rules have also limited the number of people riding on single ATVs.

The market is divided on the basis of products, applications, and regions. The products comprise sports utility, sports, utility, and youth. Sports utility ATVs contributed around 28% shares in 2015. Sports utility and sports ATV segments are expected to contribute significantly to industry growth during the forecast period. Youth ATVs stood over USD 750 million in 2015.

Applications encompass agriculture, forestry, entertainment, sports, military & defense, and others. Military & defense accounted for more than 9% shares in 2015. Agriculture is projected to grow at a CAGR of over 5% till 2024. It often employs ATVs instead of tractors and other heavy equipment.

Regions in the all terrain vehicle market consist of North America, Europe, Latin America, Asia Pacific, and the Middle East & Africa (MEA). The U.S. and Canada are estimated to dominate the global ATV market in the forecast period.

North America should account for the biggest industry in the near future. It is driven by the United States. The U.S. captured over 50% of the worldwide market in 2015.

Asia Pacific market generated about 12% of the total incomes in 2015. It should exhibit the fastest growth from 2016 to 2024. Its trend of ‘power sports’ will augment regional demand. The China industry held over 35% shares in Asia Pacific. Economic adjustments in this region can add industrial growth.

Key competitors in the worldwide all terrain vehicle market are Arctic Cat, Honda, Polaris, and Yamaha. Players often participate in mergers and acquisitions to gain a competitive edge. Yamaha was projected as the third largest vendor after Honda and Polaris. It occupied more than 17% shares in 2014.